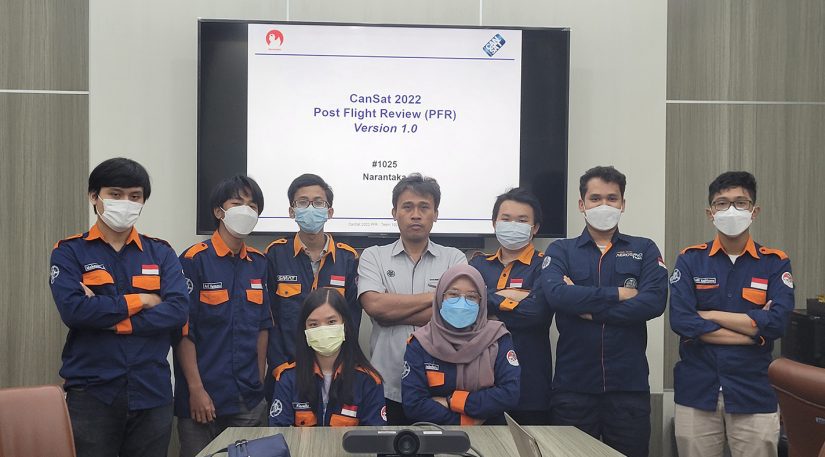 The annual competition held by the American Astronautical Society (AAS) brings up different missions every year. As for 2022’s CanSat, the mission was Tethered Payload, which all team participants were required to build a container design connected with the payload using a 10-meter thread with a camera in it to do the recording using the south orientation pointing 45 degrees from the breaking point.

Before reaching the final stage, GMAT, represented by Narantaka as its international division, needed to go through a tight qualification stage along with hundreds of other teams during the Registration and Preliminary Design Review (PDR) processes. The effort was finally paid off when Narantaka achieved the 3rd rank out of 49 and advancing to the final stage started with the Critical Design Review (CDR) process.

Prior to the pandemic, CanSat Competition was held at Virginia Tech, Blacksburg, Virginia, USA. However, due to the pandemic situation that was still going until the D-Day of the competition, CanSat Competition 2022 was held online. Narantaka team consists of Mukhsin Al Fikri L., Della Anindhita Cahyarani (TI 2019), Fiorella Averina G., Mahesafin Alna Ramadhan (TM 2019), Ari Permana (TM 2019), Ananda Hafidh Rifai K., Lutfi Andriyanto, Alphonsus Jovian Joy Reynaldo, and Dzaki Fathdanish with Dr. I Made Miasa, S.T., M.Sc. as the team supervisor who was constantly providing Narantaka with some inputs and advice during the competition.

Mukhsin Al Fikri Lubis, the leader of Narantaka, commented on how his team members kept supporting each other throughout the competition processes and stated that it was an impressive endeavor being in such a team in order to bring joy and pride for both the alma mater and Indonesia. With all the achievements that have been acquired, Mukhsin hoped that Narantaka GMAT would be motivated to achieve even greater accomplishments in the future CanSat Competitions and in any other competition ahead.

This prominent achievement by Narantaka GMAT cannot be separated from the never-ending support and prayer by the family, relatives, friends, and sponsors. A massive gratitude is given to the sponsors (Pertamina, Waskita, Bukit Asam, and PJB) for the financial support, and hopefully this partnership would last longer and would eventually bring massive benefits for both parties.

GMAT would evaluate on the process and result from this year’s competition in hope to find rooms for further improvement, all for elevating the beloved DTMI alma mater.